Test on fish survivability of the Bedford pump

For the past few decades the welfare of fish in their natural habitat has become a serious issue. For this reason, fish must be able to pass pumping station pumps (“pumps” in short), relatively unharmed. On June 12th and 13th 2012 Bedford Pumps model SAF.90.05.12 was tested for its ability to let fish pass the motor without being injured. Bedford Pumps pump has been specially developed to be fish survivable. The test known as “the fish survivability test”, was performed in a dry

dock in the Netherlands. For the tests, three representative fish groups in two different size classes were forced to flow through the pump. The groups are: 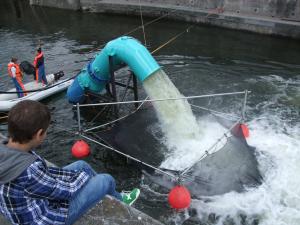 1. Except for a few large cyprinids (bream), all fish survived the test at 330 rpm and no lethal injuries were observed. Therefore Bedford Pumps SAF pump can be rated as “Excellent” for its fish survivability for this rotation speed and discharge.

2. All small percids and 99% and 98% of small cyprinids and small eel survived the test at 425 rpm (all delayed mortalities). Of the big percids 94% survived, 96% of the big cyprinids, and 98 % of the big eel (2% was considered lost for a spinal injury) survived the test. Bedford Pumps SAF pump can be rated as “Good” for this rotation
speed and discharge.