The VETT
Verderg Renewable Energy Ltd. developed a device that allows the use of hydro power at low heads. The socalled  “VETT” (Venturi-Enhanced Turbine Technology) is designed to amplify a low head source by five times, so a small, high speed turbine can be utilized economically. In a final stage the device was subjected to a test on fish survivability. To study the effect of rapid pressure change on fish, young salmons (smolts) and silver eels were expossed to a passage through the "VETT". 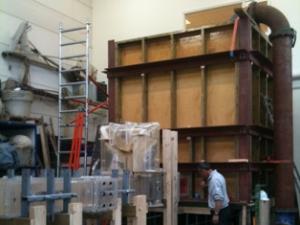 Method of testing
The test programme was carried out this spring at the VisAdvies test facilitie in Nieuwegein (The Netherlands). Fish were introduced into a full scale instrumented "VETT" model. With 500 liter water per second, the current through the venturi was up to 15 m/sec. The exposure to these extreem hydrodynamic conditions during passage device was evaluated. Assessments were made on direct and delayed mortality after 72 hours and for internal and external injuries.

Three representative groups of fish were used for the test:
- Anguillidae (eel) (one group <= 45 cm and a group > 45 cm)
- Salmonidae (Atlantic salmon and Rainbow trout)
- Gobidae (Round goby) 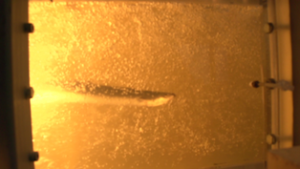 Additionally, the Sensor Fish was introduced to the VETT for all three scenario's to measure pressure gradients, rotation and acceleration.

Results
The VETT can be considered to be fish friendly in the sense that no damage, direct or indirect mortality is observed after passage through the device.
Special attention was paid to the swimm bladder of the fish. The fish utilises the bladder to trimm the buoyancy of the body. 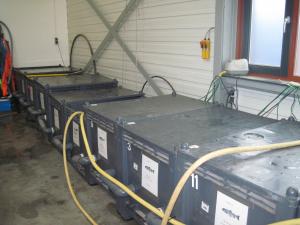 Theoretically the bladder may tear due to the rapid loss of pressure in the venturi.  However, no sign of damage was noticed at the interior of the fish. From the results, it was concluded, that the "VETT" is not harmfull to passing fish.

About VisAdvies Ltd and testing fish friendly technology
VisAdvies is largely involved in the evaluation of pumping engines, turbines and hydropower stations in the Netherlands and England. A working protocol and classifying method was developed to measure these devices in a standardized way so that they can be comparable. This protocol has reached a final stage with the assistance and approval of a team of Dutch ecological and engineering experts.